How do I monitor Cisco ASA firewalls using NetFlow 9 and PRTG?

I would like to have detailed instructions on how to use Cisco's recently implemented NetFlow 9 in ASA 5500 security and firewall appliances.

Some time ago, Cisco implemented NetFlow v9 for its popular ASA 5500 security and firewall appliances. This implementation of NetFlow is quite different from what other Cisco devices provide. It is called Netflow Security Event Logging (NSEL) and was originally introduced on the Cisco ASA 5580. Now, with the latest firmware (ASA 8.2.x or later), it has also been extended to other Cisco ASA models.

In fact, ASA NetFlow was never intended to be used for real-time or live traffic analysis. On the Cisco forums web page, the official statement is:

"[...] NetFlow on the ASA does not provide the ability to see this data in realtime. The data can be collected after the flow has been terminated and analyzed but we do not support real time viewing of the NetFlow records. [...] The total bytes transferred can only be seen after the flow is torn down. [...] Lastly, all flows on the ASA are bidirectional. All counters for a flow will increase for traffic flowing from A->B or B->A. [...] NetFlow has a significant performance impact."

Nevertheless, the in-depth traffic information PRTG gets from the ASA using this technology is very useful.

You can analyze NetFlow v9 data from ASA since PRTG 7.2. Follow these steps:

The data to be exported is defined by a service policy that brings flow data to the analyzer server. The following code works fine if your ASA still uses the default global policy (replace x.x.x.x with the IP address of your PRTG installation and yy with the desired UDP port number):

If you are using the ASDM GUI, go to Configuration-Firewall | Service Policy Rules and click Add | Use class-default as the traffic class | Next | Netflow (tab) | Add (check the collectors you want to use) | Finish | Apply.

Step 2: Set up a NetFlow v9 sensor in PRTG

Step 3: NetFlow monitoring of the ASA is online

That is all. Note that it may take a few minutes before you can see results in the graphs. 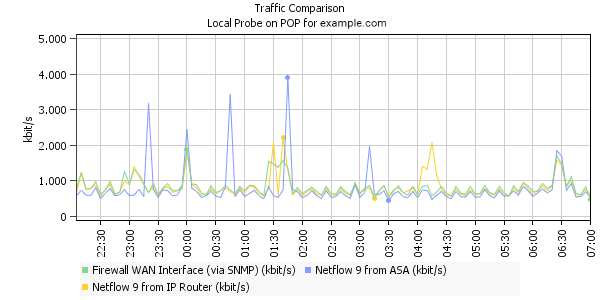 What you should know about ASA monitoring using NetFlow v9

Keep the following in mind:

Look at the sample graph above. It shows the traffic through an ASA device that is measured using three different techniques:

You can see that curves for "true" NetFlow v9 from the router (yellow) and for SNMP (green) are quite close to each other. The blue line for the ASA NetFlow tends to stay below the others and every now and then it shows huge peaks. This always happens when a long-running connection no longer exists and its complete bandwidth usage is shown in one peak. When you take the total (the "integral" of all three lines), the differences are marginal.