How can I increase the connection limit on VMware systems? PE121

How do I increase the number of connections accepted by a VMware host system (vCenter) to avoid connection timeouts when monitoring such systems with the VMware sensors of PRTG?

In the sensor logs, I receive the error messages

The request has timed out because the sensor is waiting for mutex. To resolve this issue, change your vCenter settings to accept more connections at the same time. Also try to distribute your VMware sensors among several remote probes. For more information, see https://kb.paessler.com/en/topic/30643. (code: PE121)

This sensor has not received data for x seconds. Consider distributing your VMware sensors across several probes!

If you experience connection failures in your VMware sensors, change your vCenter settings to accept more connections at the same time. If this is not enough, try to spread your sensors over several (remote) probes.

After installing this update on the probe system, you can run

Open your vSphere Client settings console from the main menu, select Administration | vCenter Server Settings.... In the Advanced Settings section, change the entry for the key Perf.Stats.MaxCollectionThreads (see screenshots below).

The default value is 2. Change it to 16 to allow the maximum of possible synchronous connections.

Restart the vCenter Server services to activate the changes. 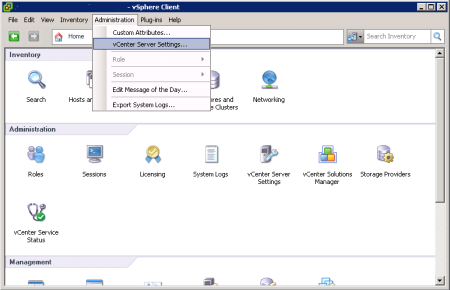 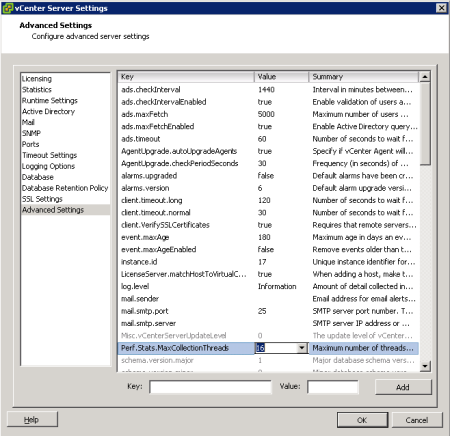 The VMware system counts incoming connections per IP address or machine that the requests come from. Spreading your VMware sensors over several remote probes also helps to increase the connection limit.

If you run VMware sensors on the Cluster Probe, each cluster node creates its own connection to the VMware server(s) to query monitoring data. To minimize load, we strongly recommend that you use a scanning interval of 5 minutes or more.