Intuitive to Use.
Easy to manage.

300.000 administrators have chosen PRTG to monitor their network. Find out how you can reduce cost, increase QoS and ease planning, as well.

Exe Script PE087 Not Working (even the demo ones)

We've made a script to transform the snmp response OCTETSTRING to an interger so PRTG.

It used to work when we had PRTG V8 , now we've upgraded to PRTG V9 and this script doesn't work anymore.

So I tried to put one of the demo scripts and even than aren't working.

We're seeing the following error in the sensor

When I run my script (and the demo ones) in the prompt i get a positive answer:

Is there a way to convert OCTET-STRING directly in PRTG 9?

How can we fix this script problem?

If you can run the script manually from command line (cmd), and it does not run properly in PRTG, please check the Windows Service Management Console (services.msc) on the PRTG Host. There then check the Properties of the Probe Service, for the "Log On"-Account: 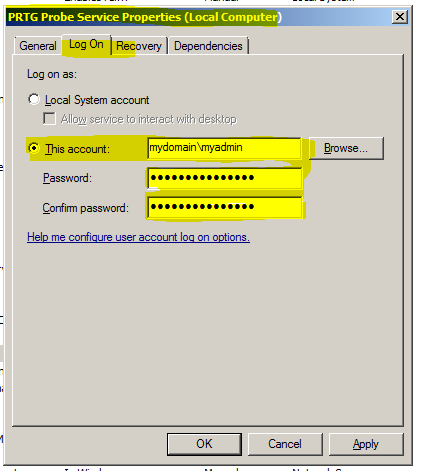 thank you very much for your KB-Post. In current versions of PRTG you can set the SNMP Custom String to use regular expressions to "extract" a number from a string. You could try that.
Otherwise, the PRTG Services changed from PRTG 8 to 9, and were re-registered in the Windows Service Management Console. Maybe you had the Probe Service running under a different account (than 'LOCAL SYSTEM') before with PRTG 8.

Thank you for you reply.

Sorry i wasn't clear. The OID that I'm polling must be a delta value. Is there a way to convert the octet string to int and make a delta after that?

In the PRTG i could find the LOCALSYSTEM account configured. But in my server when I type *mmc* there is nothing there. I'm guessing that everything is ok there since we don't have other accounts configured.

How can I troubleshoot that?

If you can run the script manually from command line (cmd), and it does not run properly in PRTG, please check the Windows Service Management Console (services.msc) on the PRTG Host. There then check the Properties of the Probe Service, for the "Log On"-Account:

Thank you for your response.

After i did what you've told me the scripts started working.

Can I change this without pausing or losing my PRTG monitoring?

I have the same problem, but I can't stop PRTG now.