Intuitive to Use. Easy to manage.
300.000 administrators have chosen PRTG to monitor their network. Find out how you can reduce cost, increase QoS and ease planning, as well.

Where is the volume line in graphs?

I monitor traffic and bandwidth usage in my network with several sensors. In the data tables of these sensors, I can see a volume and a speed value, but in the sensor graphs, PRTG only shows speed values. Why does PRTG not show the volume in data graphs?

This article applies to PRTG Network Monitor 19 or later

Volume is the latest retrieved value and speed is the averaged volume during the last scanning interval:

For example, if the value for volume is 6.000 # (total number of packets) after the last scan, then speed is 100 #/s (packets per second) with a scanning interval of 60 seconds.

Why there is so volume in graphs

In PRTG, the x-axis in graphs indicates the time of the sensor scans. It is the “time line” of the sensor’s data history, so PRTG displays all data in graphs based on linear time. If all sensor measurements would have the same scanning interval (for example, 60 seconds), volume and speed graphs would have a linear conversion and their graph lines would always match each other.

However, sensor scans most likely do not happen so regularly, for example, if you click Check Now for an extra measurement or the sensor missed a value because of a timeout. In this case, speed and volume do not convert in a linear way and causes issues for a time-based graph. For volume display, there are two options:

Both ways would cause confusion because someone would always expect that the behavior was different. The only way to correctly display delta sensor graphs both mathematically and visually is to use the speed value.

Consider a printer that constantly prints 10 pages per minute. Looking at the volume that is measured in a default scanning interval of 60 seconds, we would get the following values:

The resulting graph would show a straight line for the volume: 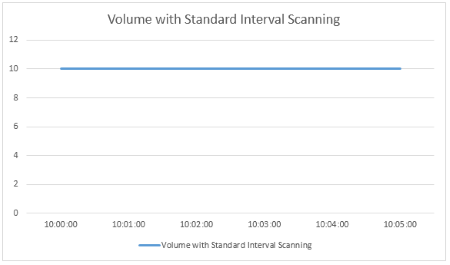 But if there were any irregularities in the scanning interval, for example, because of an extra scan via Check Now or because of editing device settings, the measured volumes could look like this:

This results in a volume graph with a curved line that will not let you recognize any peaks: 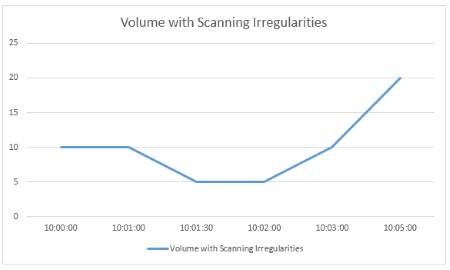 Displaying the measured values as speed averages the volume to time. For the sample volumes from above, this results in the following speed values:

So you get a straight line again in the graph, making it easy to recognize peaks or dents: 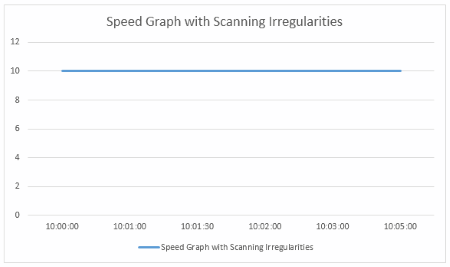