How can I use the new QOS Custom Target with PAT?

I want to use the QOS Roundtrip Sensor with a custom target. How do I set up the PAT rules in my firewalls?

This article applies to PRTG Network Monitor 14.4.12 or later

How to set up a QOS Reflector with PAT

What we tested out here at Paessler was setting up a Windows machine running Python and our new QoS Reflector script behind a Fritzbox WAN router and used our PRTG core, which was behind a Cisco 800 series router and a Sonicwall Firewall, to send the reflector QoS packets through a QOS Round-Trip Sensor.

Here is a small diagram showing what the set up looked like: 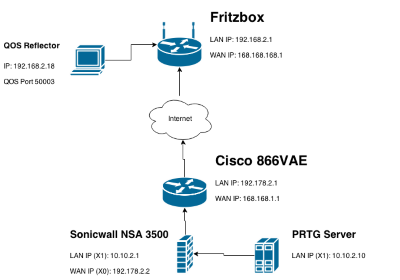 In the Fritzbox we had to go into the port forwarding section and set up the following rules: 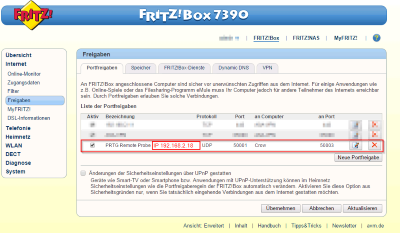 Since our sensor is sending on port 50001, it will expect the answer to come back on the same port so we need to PAT the returning packet with the Sonicwall.

First we had to set up the Cisco Device to forward the packet to the Sonicwall without PATing the packets. We used the following NAT rule to do this:

The Dialer1 interface is a PPOE Connection to our provider with the WAN IP 168.168.1.1. This could be any other WAN connection based on the type of connection you have to your ISP. Note that the ports in this rule are both 50003 since we are only NATing this traffic. 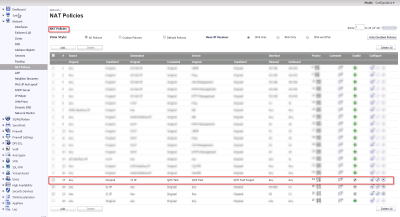 Along with this PAT rule, we also need to set up our Firewall to allow these packets through.

With these two settings the PRTG server will now receive the UDP packets from the reflector on port 50001 with the information on how long it took etc for the sensor.

Hi, I am setting up QoS Round Trip sensor behind NAT and I think it should be updated as the following:

Currently when the Core server sends out UDP packets to destination (remote probe or QoSReflector), destination port is 50000 (as default setting, or we can change to different port) and the source port is random (for example: 40000). But the sensor is listening on port 50000 to receive bounced back packets. So we have to open port 50000 on local NAT/Firewall to let bounced packets to come in. There are some drawbacks:

There are some advantages:

Note: we still need to open port 50000 on remote NAT to allow incoming packets to go through to remote probe or QoSReflector.