What can percentiles tell me about my monitoring data?

I want to generate a report of a sensor’s historical data and PRTG asks me if I want to include percentiles. Should I? Are they useful?

This article applies to PRTG Network Monitor 15 or later

In addition to averages, PRTG Network Monitor offers percentile calculation in the Report settings. Percentiles are a statistical measure that gives you insight to the distribution of your data, whereas measures like percentages represent the proportion of a certain amount of data.

To illustrate what you can gain from percentiles in PRTG, it is useful to have real monitoring data as an example. The WMI Vital System Data (v2) sensor for example, can monitor an MS TCP Loopback Interface showing how many Bytes are sent per second.

1. Generate a Report Including Percentiles

Via the Historic Data tab of a sensor, you can access the report function directly. You have several options how to arrange your report.

Besides an overview table showing the most important sensor data, a graph illustrating what happened in your sensor channels during the selected period of time, and a sensor status history in table format, PRTG offers a detailed table of the daily sent Bytes/sec during the month you indicated before. 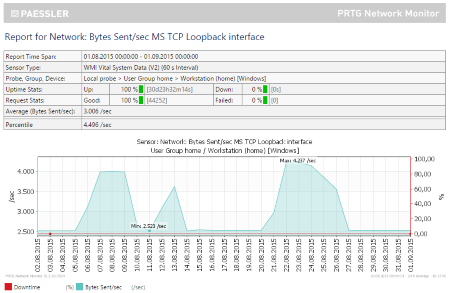 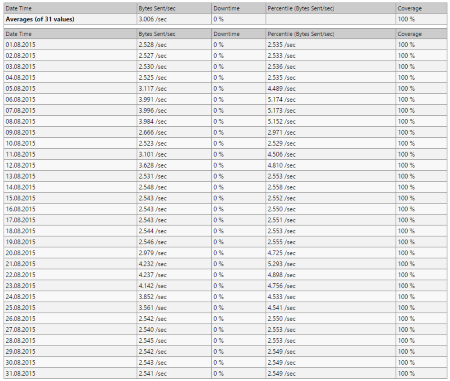 From this observation you can conclude

After that it is up to you to find the reasons why. Does your network, for example, reflect a weekend vs. workday difference (since August 1st 2015 is a Saturday and August 12th 2015 is a Friday)?

You can also continue your statistics by comparing the lowest and the highest averages and percentiles per period, or by comparing different periods and different devices, and so on.