Why will dependent objects not automatically pause when I pause the master object?

When I pause the master sensor either manually or by schedule, I expect that the dependent sensors are paused, too. Why does this not happen?

How pausing works in PRTG

Generally, there are three ways of pausing an object so that it shows the Paused status in PRTG:

The rules in short

We will use a Ping sensor that is set as the master sensor for a device as an example.

If a master sensor changes to the Down status, all other dependent objects are paused. So, monitoring is paused by dependency.

Reason: Because the master Ping sensor is primarily responsible for the entire device, its error status triggers the information that the device is down. That is why all other dependent sensors are paused until the device is up again.

When the master Ping sensor changes to the Up status again, all other sensors resume monitoring and show their own states based on the data they retrieve after the rescan.

If you want to test this, you can simulate an error status in PRTG. It has the same effects. Pausing by dependency works with sensors in the Down (Acknowledged) status as well.

You can, of course, pause monitoring intentionally at any time, no matter which sensor status the master sensor currently has.

To pause an object, you have two options: 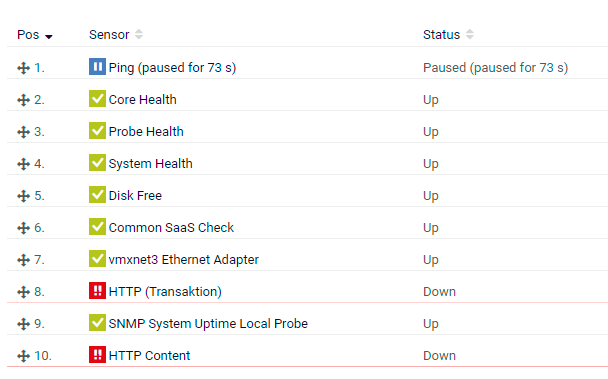 This mechanism is implemented to guarantee maximum monitoring uptime of your network.

If you want to pause monitoring for all objects at once, including master and dependent objects, pause an object that is higher in the object hierarchy.

For example, to pause a master Ping sensor and other dependent sensors at once, pause the entire parent device.

is there any intent to expand these possibilities?

I'm currently reorganizeing our structure to get a better overview and I would find the option usefull to pause a dependend Device via pausing the Master Device with the Masersensor. This should not be the default for sure, but the option to set this via Device or Sensor if needed would be really nice.

to pause a selected device, for example due to maintenance work, you can set up a (one-time) maintenance window via the device's Schedules, Dependencies, and Maintenance Windows settings.

I'm afraid I did not express myself clearly enough.

If we need to do some maintenance work on our Systems we simply pause them. It is a bit awkward to go to the settings and set the maintenance there just to pause the Devices or Sensors, especially if it isnt clear how long the maintanance work will take.

But that wasnt my Point at all.

Is there a way to pause a Device by pausing another Device?

I dont want you to change your default behavior. I only like to have an option to set an exception via Device or Sensor. So the Device / Sensor will be paused if the Master Sensor is in error state or is paused.

Thank you very much for your response.

"Is there a way to pause a Device by pausing another Device?"
No, you will need a sensor to be the determining object to be able to pause another device. I believe that we are speaking from the identical procedure and as we've encountered some issues with recent versions of PRTG speaking about dependencies, please make sure to use the latest available stable version for your purpose.

The procedure would be to define a sensor (let's go with a simple Ping Sensor or use the Green IT sensor).
Afterwards, head over to the desired object (device, group, etc.) that should be paused in case the previously created sensor is 'down'.
Disable the inheritance of 'Schedules, Dependencies, and Maintenance Window' and select an object (in your case the previously created sensor) for 'Dependency Type'.

As soon as the sensor is 'down', the object should be paused by dependency.

Thank you for your answer.

I'm sorry that I have formulated my question wrong. I know that you need a Sensor to be the determining object.

And there is no Problem and this all works fine.

I only like to know if there will be the possibility in the future to have the option to decide that not only the 'down' state is responsible to trigger the Dependencies and pause the objects. It would be handy in some cases to define the states for yourself. In my case it would be nice if the Dependencies for some objects would be triggered if the determining sensor is 'paused'.

Thank you very much for the clarification. In this case we really spoke about different things.

I believe your request is a legitimate and reasonable inquiry, therefore feel encouraged to raise a feature request as described here:
How Can I Propose New Features Or Sensors For PRTG?

This approach allows other PRTG users and the community to vote for the feature request to strengthen it and to raise awareness for our developers.