Intuitive to Use.
Easy to manage.

200.000 administrators have chosen PRTG to monitor their network. Find out how you can reduce cost, increase QoS and ease planning, as well.

How can I monitor SCVMM hosts and VMs with PRTG?

I would like to monitor hosts and virtual machines that are managed by a Microsoft SCVMM. In previous PRTG versions, there were the sensor types SCVMM Host sensor and SCVMM Virtual Machine sensor. As announced in PRTG version 16.1.23, these sensor types are now deprecated and were removed with version 16.x.25.

Is there still a way to include SCVMM hosts and SCVMM VMs into my monitoring with PRTG?

This article applies to PRTG Network Monitor 19 or later

The SCVMM Host sensor and the SCVMM Virtual Machine sensor are two sensor types that we removed in the context of the PRTG Sensor Cleanup. You could use these sensors to monitor hosts and virtual machines (VM) managed by a Microsoft System Center Virtual Machine Manager (SCVMM) like Hyper-V, VMware, or XenServer hosts and VMs. As of PRTG version 16.1.23, you cannot add these sensors anymore and running SCVMM sensors were removed from PRTG with version 16.x.25.

Nevertheless, you can still continue (or start) monitoring your SCVMM. For example, you can use an EXE/Script sensor that runs an according PowerShell (ps1) script.

We provide a custom script for SCVMM monitoring for download and you can additionally use a device template to automatically add SCVMM sensors to an SCVMM device. Follow the steps below to add sensors that monitor SCVMM hosts and SCVMM virtual machines to your PRTG installation.

Using the PowerShell script, you can monitor the following values on a SCVMM host:

For an SCVMM virtual machine, the custom sensor can show the following values:

To use the custom sensors for SCVMM monitoring, you need to fulfill the following requirements. These are the same as for the SCVMM sensors that were available in previous PRTG versions:

When you directly enter the data in the script, you can also test it on the fly. Initially, it will look like the attached screenshot #1, consequential runs will look like #2. Note that the sensors may not get any data immediately after the first run. This is because the sensors' startup will take some time and the script may push values prior to that.

Detailed output of the sensor when it is initially executed adding new hosts or VMs:

Detailed output of the sensor when executed with an existing GUID file: 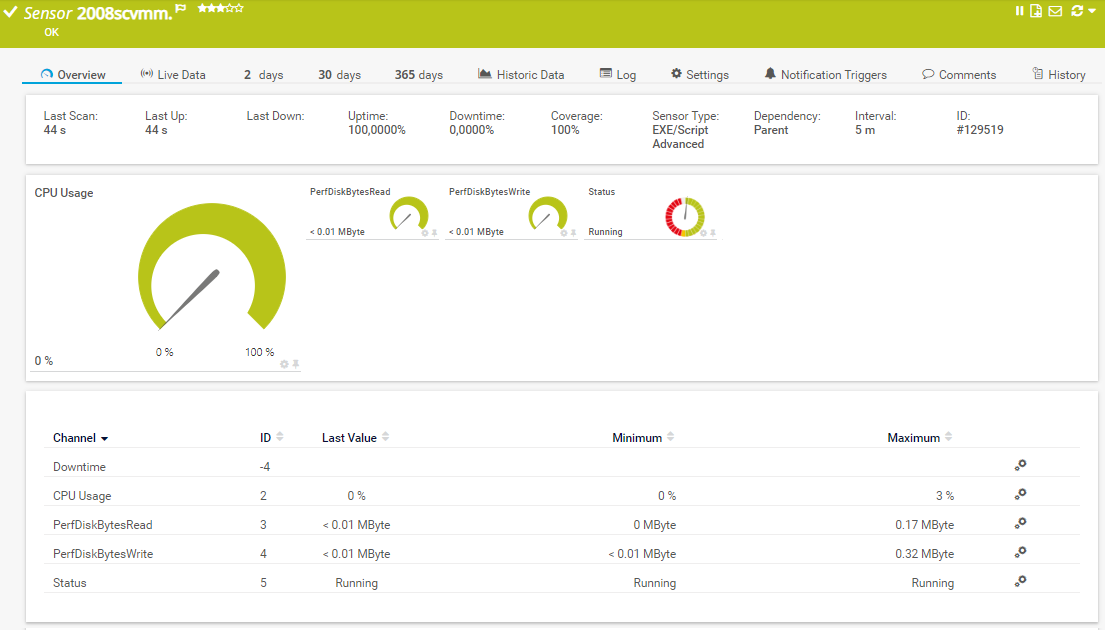 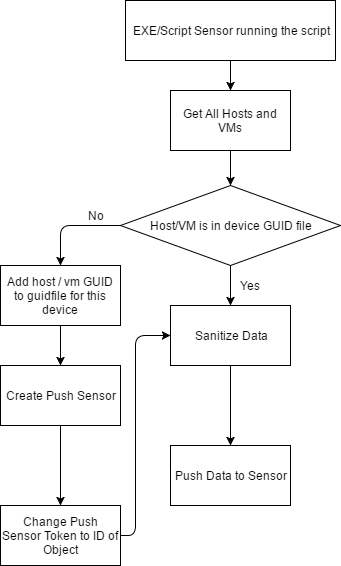 Special thanks to Richard Garner, computerservicecentre.com, for going through countless tests and bugfixing with me and giving ideas for improvement.

Attention This will not work if your PRTG server uses HTTPS with an unsigned SSL certificate because of PowerShell being picky and only accepting signed certificates.

I've installed a remote probe on my SCVMM box and tell it to use the custom discovery like the guide above says. Finds 0.

When I try to run the PRTG-SCVMM-HyperV.ps1 from the machine with the probe I get (regardless of PowerShell running as Administrator or not):

If I run the PS1 from my PRTG server to the SCVMM server NAME.DOMAIN.COM it works. I get a list of HyperVs back.

It looks like as long as I'm not localhost the PS1 file will work.

How can I make this work in PRTG?

This is probably due to remote powershell not being properly enabled. Please check this for further instructions. Make sure to download the latest version of the sensor from the initial reply as I posted a new version :)

The sensor is succesfully seeing my SCVMM, however i am getting this error when running the script

I am running SCVMM 2016, however looks more like an issue getting the data into PRTG.

Any ideas or tips would be great.

Did you manually create the HTTP Push Data Advanced sensor before you ran the script?

This seems overly complicated. PRTG has always allowed me to quickly monitor simple and complicated things in an "easier to setup" way then other monitoring applications. This is why I recommend PRTG to other users. But this is not simple.

The instructions could use some more detailed, "example based" instructions for setting up the parameters for the script. This custom sensor should be reworked so that is select-able with the parameters in the web gui vs doing it this way. This would mimic the previous sensor, but require the powershell modules. I recognize that VMWare is probably easier to monitor. Sensors for HyperV and System Center Virtual Machine Manager should be something that PRTG makes easier to setup and monitor then the other monitoring companies.

Thanks for a great product and for listening. DB

Yes, this custom sensor solution is rather complicated. But custom sensors cannot be made select-able in the web gui. We don't want to re-add this sensor to the web gui as we deprecated it just last years because of its little overall usage.

It surely appears counter-intuitive how we make the software better if we remove existing features. The idea is two-fold: One, we keep PRTG simple. Second, we reduce the source code, making it easier to rework and easier for new developers to get into it. That means, that we try to not implement little-used features in the first place, and last year we even removed existing, but little-used sensors.

While SCVMM monitoring is now admittedly more complex, we used our development resources to make other things better.

We've got more than 8000 VM's in Hyper-V and I'm very pro-PRTG, so I've tried to sell PRTG in our organization. Because of this issue they've decided to not buy the unlimited license.

While the script was tested with around 300 VMs, this surely is over the top and we cannot test this with such large environments :( It's rather possible that the script will take a loooong time to retrieve the host servers and virtual machines, running into Windows' 20 minute child process timeout rather than working correctly.

For environments that large, you're probably better off with Microsoft SCOM :)

We've got an environment with more than 8000 vm's. We're currently monitoring using PRTG the yper-V hosts only. We would like to buy the unlimited sensor suite of PRTG, but only if PRTG can measure VM's in Hyper-V cluster aware, and directly on the Hyper-V node without SCVMM.

Are you basically saying that PRTG is not a good product for our sizing when it comes to live migrating VM's in Hyper-V?

In that case, I'd recommend against it, yes. The HTTP Push Sensors used in this approach are putting less strain on either system (target host and PRTG). It's unfortunately a chicken and the egg case. We can't monitor moving VMs moving on HyperV clusters; even if we could, it would be 8,000 WMI queries against the systems. The script approach above is querying Hyper-V directly, querying all VMs and hosts at once. However, it has not been tested with that amount of VMs - the most we had were about 400, and it took quite a bit to get the values (took about 2-3 minutes to get them).

Hi. I'm trying to set up this custom sensor to monitor two SCVMM machines, one SCVMM 2012r2 and one SCVMM 2016. I don't why, but i cannot seem to get the parameters correct on the sensor settings.

I feel like i have tried all possible combinations to get it to work. Can anyone please give me an example on the correct syntax to use for the parameters when creating the sensor?

Sorry that this took a while, as I was on vacation :( What does your log look like and what parameters do you use, exactly? Did you create the SCVMM device on a remote probe by any chance?

Hi Stephan. I have been on vacation also, so no worries there. :)

What logs would you like? Can i PM them in some way? The parameters i entered are anonymized but here is the exact string entered on the parameters field on the sensor settings.

The device is created on a probe yes. I have installed the hyper-v script package on both the probe and the main PRTG server.

It has an additional parameter -prtgProbeAddress, allowing you to pass the FQDN/IP of the Remote Probe. It should work with that one. Otherwise, execute the script on the PowerShell command line with the same parameters, including -Verbose (=$true is not necessary, as it's a switch) and post it here with !NO PUBLISH. Then I can check it without others seeing it :)

Is Remote PowerShell enabled on the SCVMM Server, as disclosed on HowToGeek? The script complains that it cannot connect to the target host :)

Issue remains that the script cannot connect to the target host :( Try the domain without .local in the userdomain instead.

Sorry, no luck there. Still unable to connect. I have also tried to use the FQDN for bbvmm.

Executing Get-Command -Module hyper-v | Out-GridView on the target host will give you a comprehensive list of installed Hyper-V modules. Get-VMHost and Get-VM should be included there. Is that the case?

Hi. Sorry for the late answer. Yes. Get-VM and Get-VMHost is in the list on all hosts. I also checked our SCVMM servers. Both have the Powershell modules for Hyper-V management. Still not getting anything.

I'll drop you a mail later as this is seemingly something different I'm not seeing yet. I'll be in touch.

I've made a small modification to this script as my SC-VMM also has ESXi hosts in there as we're using the SCVMM tools to migrate away from VMware. I don't want PRTG to be monitoring ESX hosts and vSphere clusters via SCVMM so I've changed lines 423 and 424 from

That way, it only returns Hyper-V hosts and VMs.

I have created the sensor for the VM monitoring as described in the manual. Unfortunately, the VMs are created twice and in -guidfile.dat no entry is made.

How can I solve this problem?

This likely means that the script can't connect to your SCVMM host and read the hosts/VMs. What's the output of the script when running the script within ISE, configuring the parameters directly in the script?

The script says that no connection can be made. But in PRTG, VM sensors are created. Unfortunately, I do not have all access data and permissions for the SCVMM server, these are only stored in PRTG. Is it possible to display the output of the script via PRTG?

Are you using these Sensors on a Remote Probe by any chance?

No, i use the sensors on the local probe under the SCVMM device

Strange. Could you check if it makes a difference when disabling the IE first run wizard on a system level, according to https://stackoverflow.com/a/43496639 - simply create the registry entry and let the script run again. Do you get the same error?

The registry entry has brought no change. I have run the script once with the correct access data directly on the core sample. There were three error messages. The VMs were successfully read and created in PRTG as a sensor, but these sensors do not provide any values. In addition, duplicate sensors with the same GuID will continue to be created

Are the latest PowerShell version (5.1) and .NET installed on the PRTG Server? Please also try the updated script version available at github. Thanks!